I popped up Castle Hill two days ago and discovered that 13 wind turbines can now be seen from Cambridge. 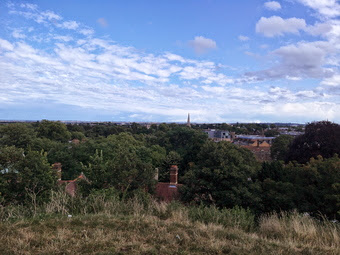 The wind farm is called Wadlow Farm and here is a bit of it arriving during the 2011-2012 construction:

Energy density of a spring

Energy density of a spring (or a "mainspring")

My 2-year-old son loves wind-up toys, and that set me thinking... what is the energy density (the energy per unit mass) of a wound-up spring? After a bit of googling, I have come to the conclusion that this is one of the few questions to which the internet does not know the answer! Quite a few people have already asked the question.

For example, on the xkcd forum " today I began thinking about mainsprings, the coiled springs typically used to power wind up clocks, watches, etc. While reading up on them I began to notice a trend where articles comment on how much energy they can contain (usually described as "a lot" rather than anything useful.) This led me to try to find a source for the potential energy of a mainspring, something that I've found rather difficult to find." The same question has been asked more than once on physicsforums.

And there must be plenty of experts who know the answer

... for example these Birmingham researchers, and about 400 years of clock-making experts, and Trevor Bayliss who made the wind-up radio. I don't know why they are so secretive! :-)

Let's figure out a rough answer to the question

A coiled spring stores energy in the same way as a bent beam. You can read about the energy stored in a bent beam in my lecture on the musical note produced by the "beams" of a marimba or xylophone. It's interesting stuff, but actually we don't need all that detail to get the answer. The key insights we need are

Putting these facts together, if εmax is the maximum strain [εmax=τmax/Y] The maximum energy per unit mass in the bit of the spring that is maximally strained is
0.5 Y ( τmax/Y )2 / ρ = 0.5 (τmax)2 / ( Y ρ )
Now, not all of the spring will manage to be in this state of maximum strain, and the spring must be housed in a container too, which adds to the weight, so this energy density is an upper bound on what is possible with a spring made of a given material.

We can compare these energy densities with those of other energy storage systems featured in my book by looking at page 199. Sadly, the wind-up spring doesn't get close to the energy density of even the worst rechargeable batteries (30 Wh/kg).

[Next steps: quality-assure the numbers in the table, and do a real-world check against the actual weight and actual energy stored in real clock mainsprings.]