Chapter 15: starting a new life
There are quite a few developments to report — First, the happiest news: I saw my big chief oncologist on Monday 4 January and we agreed that I am stopping chemotherapy now, having had six cycles of chemotherapy, rather than the full eight cycles that was pencilled in five months ago. Happy happy happy!
Here's the clinical information that underlay this decision. In my latest CT scan, taken on 30th December 2015, the evidence of a secondary tumour in one of the vertebrae of my spine had gone away; my stomach wall looked thin (which is a good thing); and a couple of lymph nodes are potential causes for concern - one of them has plumped up a little since the last scan, and another has become visible that was not visible before. The plump lymph nodes are not necessarily cancerous - they could just be plump because they are busy doing their job. So this seems like a 1-1 draw. I asked my doctor to talk me through the decision to have chemotherapy, which we took five months ago, and to update the decision making to this week's situation. Five months ago I drew, on the basis of what the doctors told me, a quality of life graph like this: 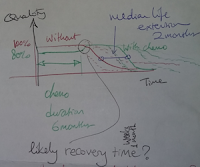 showing quality of life versus time without chemotherapy (red) and with (green). The deal, five months ago, was that chemo might reduce quality of life by 20% or so for 6 months, and in return there might be some extension of life, with perhaps a steeper downturn in quality of life at the end; the median extension of life was a remarkably small 2 months, but if you get to be in the lucky right hand half of the distribution [indicated vaguely by dotted lines] you might get a bigger life extension. The doctor recommended trading in the 20% over 6 months in return for the expected life extension. So, this week, I asked the doctor to help me update the graph to the present situation, having completed 6 cycles, and considering whether or not to have another two. He told me that there was considerable uncertainty, no strong evidence of a benefit from cycles 7 and 8, and that other hospitals would recommend only 6 cycles not 8. He said there is good evidence that the bulk of the benefit of chemo comes from the first 3 or 4 cycles. He said it was credible that the benefit of cycles 7 and 8 was no greater than the 6 weeks of life which I'd be devoting to chemo, if I went ahead, and he said that he would be sympathetic if I said 'let's stop', based on my judgement of the expected loss of quality of life. So I said "let's stop" (yippee!). Except first, to put the decision in context, I also asked the doctor to update for me my projected survival curve, which at my time of diagnosis looked something like this,

with a central summary of "you might die roughly 12 to 18 months after diagnosis", accompanied by the tail-probability summary: "very unlikely to live more than 2 years after diagnosis". I asked whether the new data and observations over the last five months led him to update these projections. He said, essentially, "no, not yet"; I will have another CT scan in 6 weeks, and that might enable a change of view; and also the fact that I have responded well to the chemo means I am somewhat less likely to be in the left half of the distribution and more likely to be in the right. But my updated prognosis remains "likely to die 12 to 18 months after diagnosis", which means roughly 6 to 12 months from now (with a slim possibility of 18 months). With such small durations on the cards it definitely feels the right decision to stop chemo, to stop being a patient, and get back to feeling fit and having maximum fun as soon as possible. I'd like to thank the Addenbrookes staff for doing a super job of scheduling the CT scan and getting the results analysed in time for my clinic this week; and all the Oncology day unit team for being so lovely during my chemo visits.
The second somewhat shocking development – at least to those who know me – is the acquisition of a new car (also on 4 Jan 2015).

This is the first car I have owned since 1991, when, living in LA (where it would of course be against The Constitution not to drive) I owned a tiny red convertible. We have bought a brand new Skoda Fabia. Our main motivation for having a car is so that my wife can learn to drive. Maybe we will go for some road-trips or car-assisted holidays too.
The third piece of news is medical again. As I mentioned in Chapter 10, I enrolled in a research study to attempt to measure my cancer using DNA markers in the blood, I gave research blood every month, and I volunteered to have an extra gastroscopy so that samples of my tumour could be taken away and sequenced. I cycled to the hospital today to hear how the research was going. Surprisingly there was simultaneous good news and bad news: My in-stomach tumour had reduced so much by the time of the gastroscopy that none of the biopsies that were removed from me contained enough tumour tissue to get the required DNA samples! Good news for me and my chemo, but not such good news for the research project. The research team had gone back to my other biopsies that were taken from my peritoneum and that had been fixed in paraffin (which is not good news for the DNA boffins), and pulled out DNA sequences for just 50 genes, including ones that were likely to be mutated in cancers. As I said in Chapter 10, a single gene, called TP53, is mutated in more than 50% of human cancers, and it turns out that TP53 (exon 5) is mutated in mine. All this trouble, just because of one nucleotide! The research team are now thinking of setting up a diagnostic process where I give them a monthly blood sample and they use DNA probes specific to my TP53 mutation to return a month by month measurement that may indicate what my tumours are up to. This seems like a very good deal to me.
The fourth piece of news is an update to our parade of wonderfully-successful film viewings. Courtesy of BBC iplayer we watched the delightful Come as you are, which gets five stars. We also watched the Royal Tenenbaums, which gets two stars.

In closing, here is a data update...
Blood measurements (Haemoglobin, and various white blood counts) before and during six cycles of chemotherapy. 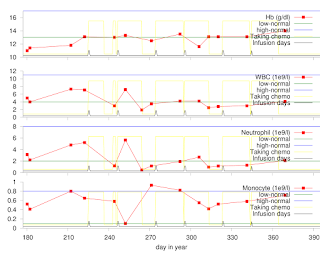 Posted by David MacKay FRS at 8:40 AM

I teach a 'The Sustainable Citizen' course at Hong Kong University of Science and Technology and use your excellent work on Sustainable Energy without the Hot Air - THANK YOU.

While updating for this course I've just learn't your news via Wikipedia and this blog. A very helpful record should I ever have a similar problem. Thank you again.

I've a couple of other comments which I'd prefer to send by email rather than on the comment board. I'm on gibswong@gmail.com

Dear David. I had wondered why we hadn't heard much from you recently. There are a lot of postings on the twittersphere regarding the benefits of renewable energy and dissing nuclear. I wondered whether you had anything to comment with regards to updating any of the information and arguments used in your excellent book. even if just a couple of paragraphs I'm sure that will be appreciated by many. Enjoy the rest of the time you have; I hope you are well enough to do that. Have a big party with lots of dancing and fun. Sue Everett