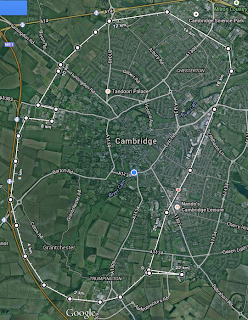 I have long thought that West Cambridge (and Northwest Cambridge, now that it is being built) should be connected by fast public transport to Cambridge railway station and to Addenbrookes hospital. The rough map above shows a proposed route running (from NW Cambridge) East to the Science Park and the new Chesterton Junction Railway Station; and (from West Cambridge) south alongside the M11 to Trumpington and the guided busway. This route would connect to both the Trumpington and Madingley Road Park-and-Ride sites.
If there were a nice cycle-path along these routes too, it would provide pleasant commuting options for people who live outside Cambridge to get to work at the West Cambridge, NW Cambridge, or Science Park sites.
The part alongside the M11 could have a nice view of the Cambridge wind farm that I visualised in June 2009. A 36-turbine wind farm would produce enough power, on average, to power the University's Departments and Offices (not including the Colleges). I think that an arc of turbines alongside the M11 could make an interesting icon.
Posted by David MacKay FRS at 7:25 AM 1 comment:

Today I unpacked a MacBook Air. I have used Ubuntu Linux happily for a long time, but it seems to be time to migrate.


I'll record my progress on this blog-post.

I installed MacPort and it provides a functionality very similar to apt (apt-get install blah). And I found that many packages are supported by Port, some of which I had never expected to see again! xcode had to be installed for port to be able to do its thing. To get "locate" to work, I did this: Tom taught me about caffeinate -i to stop the machine from going to sleep. It is already installed.
To get focus to follow mouse (into terminals at least) I tried this, but it didn't seem to work.

I installed Quartz because xdvi said it needed X11 in order to run. It says I need to log out and in to get X11 to work. Not sure what that means.

I used system preferences to crank up the key-repeat speed to the maximum. I switched off most of the audible notifications; to switch off the "outgoing mail sounds like a jet engine" nonsense, I had to go into mail preferences.

I need to figure out whether going with MacTeX is a good idea or should I find a version in Port and stick with that? Instructions for MacTeX

I want shift-3 to give # not £ so I went into keyboard preferences, selected "show keyboard options in menu bar" and then added US as well as UK to the list of available keyboards, and switched to US.

Keyboard shortcuts in Apple's Mail programme - can I get it to feel like mutt? Why doesn't "mark as junk" come up as an option? How to move mail's focus between the message and the list of messages? What is the keyboard shortcut to close just one terminal window? (not all terminals! which is what cmd-Q does) Why does not work? How can I get the command line completion feature that I had in tcsh? (e.g. ls !$TAB)

Using search is usually quicker than navigating to find stuff. Cmd-space (Spotlight) to find apps (including switching to open ones), files, emails, etc. Or use the search box in ‘file open/save’ dialogs. (Quicksilver is a fancier search/launcher system, which I don’t use) If you download an app from the internet which hasn’t got Apple approval, the first time you launch it, override the fact that Apple “protects” you from it by “right clicking” (two-finger-click or ctrl-click) and ‘Open’. Thereafter it will open normally. You can turn off this security feature completely if you want.

Time Machine is indeed excellent for backup - and as the name suggests you can go back to older version of files if you need to. You either plug in an external drive, or configure it to use a device on your home network (Apple Time Capsule or non-Apple equivalent NAS device, just check it offers Time Machine support).

Personally I would be wary of iPhoto - it has some nice features but I don’t trust it either to look after my photos or give them back to me when I want to stop using a Mac.

I don’t know if ti’s still the case, but to get backspace to work properly in Terminal when ssh’d to a Linux box, in Terminal Prefs, I had to select rxvt as terminal type, uncheck 'Delete sends Ctrl+H', (http://chad.glendenin.com/macosx-backspace.html)

Everything below this point is third party stuff you need to install (mostly free):

nvALT is an updated version of notational velocity (which Tom mentioned) - for keeping text-based notes. Works well for me too, and you can store the notes in Dropbox so you can access them on your smartphone too.

pwSafe - password safe (not Mac-specific, but there’s a mac version) (syncs to phone etc too)

Making disk images - Carbon Copy Cloner. Good as an extra backup, and also if you lose you Mac or, heaven forbid, it dies, you can plug the disk into a friend’s Mac and boot up your system straight off it.

An alternative online backup: Arq (looks nice, haven’t got round to trying it yet).