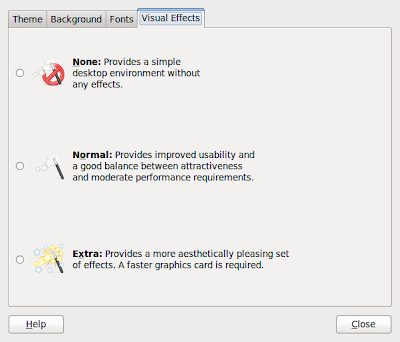 I wanted to restore behaviour to be like my twm set-up; I had a very confusing time, because it seemed along the way I had changed window manager from compiz to metacity (which meant none of the compiz settings were having any effect any more). Where was this choice determined? The answer was that I had at some point switched the Appearance setting to have "no animations", instead of "some exciting animations, oo oo ooh", or "lots of stupid 3-dimensional swishy rubbish", and this silently switches window manager! In order to get the other useful features of compiz (Eg suppressing some window titles), you have to switch back from "no animations" to one of the stupid animation levels.
Then the question is how to switch off all the animations one by one...
Niggle two: window-switching
I used to have my windows on the desktop in a cycle. Then I could use one key to rotate up the cycle, and one to rotate down it. With the default "Alt-tab" way of doing things, the windows get reordered every time you switch windows. This doesn't suit my brain's way of navigating. What's the compiz way of getting a cycle? I haven't figured this out yet.
I have a partial solution...
Under compiz settings -> window management -> application switcher, I have selected under "Bindings"
Next window = Alt-tab
Previous window = Ctrl-tab
Next window (no popup) = F10
Prev window (no popup) = F12
and under "General"
Speed 19
Timestep 0.1
Saturation 100
Brightness 100
Opacity 100
Bring to front NO (but this does not seem to work, see below)
Zoom 0
...So Now I can rattle through the windows in one direction with F10 and in the other with F12... except, F10 doesn't leave the order of the windows unchanged. Is this a bug? So actually F10 simply exchanges two windows only.
Posted by David MacKay FRS at 8:01 AM 23 comments:

In my new job I have been forced to use Microsoft Office for the first time.
One of the minor painful issues has been the impossibility of adding "misspelled" words to the custom dictionary so that the "correct spelling?" dialogue doesn't keep nagging. The "add word to dictionary" option was always greyed out, and I couldn't figure out how to get this option to be enabled.
At last, I have been given a fix, and it works.
Custom Dictionary fix instructions

1. Ensure that any Office 2007 products that are currently open are closed before proceeding.
2. Find your custom dictionary located under P:\Office97\Custom.dic, create a backup by right clicking on the file and selecting copy. Paste the file within the same folder, a backup will be created called “Copy of Custom.dic”.
3. Now open Custom.dic file by double clicking on it. The file will open within notepad.
4. From the File menu select “Save As”. In the “Encoding” field set the encoding type to be Unicode.
5. Select Save, click Yes to confirm that the file should be replaced.
6. Close notepad.
7. Start Microsoft Word and confirm that you can add words to the dictionary.