Bayes' theorem makes it into the BBC

This article about false positives seems quite well done.

The BBC article links to an animation on the Understanding uncertainty website. I'm not sure if the animation is a good teaching aid - it shows the test being applied with a great random rattling of the faces of the 100 humans. I think it would be better to reveal the truth early so the viewer can understand the generative process, instead of it looking like every individual is being utterly randomized. I also find it confusing that colour (Red/green) is used initially to encode test result, then it is later used to encode the underlying truth. I think two different dimensions should have been used.
I'd reveal the truth, show the generative process, then hide the underlying truth to emulate "what the tester sees"; then reveal the truth again.

ps... I find it a bit uneasy-making that the whole set-up involves "detecting terrorists". The implicit endorsement of "war on terror"; the endorsement of the campaign to "be suspicious of your neighbours, look for stuff in their bins, and get them arrested and interrogated".
Posted by David MacKay FRS at 3:29 AM 1 comment:

How to handle copyright forms from dinosaur journal-publishers

If you want to publish an article with a dinosaur journal that says "you can't publish your academic work on the internet any more; all your copyright are belong to us", here is the recommendation: fill in the
SPARC addendum and attach it to their copyright form.
Assuming the journal publisher accepts this addendum, your work can then benefit from the modern day miracle of efficient communication.
Posted by David MacKay FRS at 3:11 AM 3 comments:

One hundred and eighty! 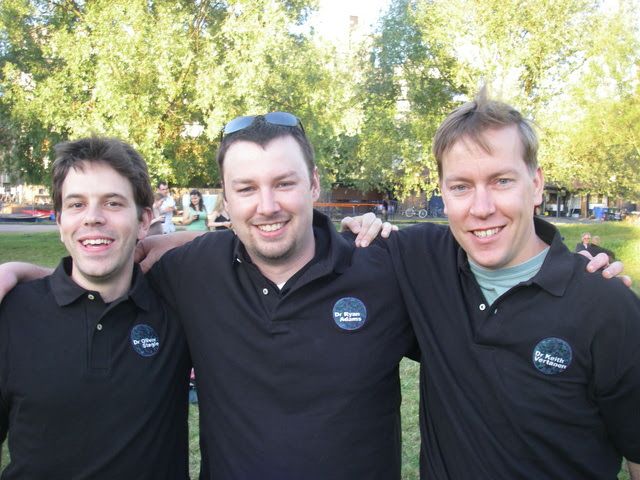 Three students in the inference group had their PhD vivas on June 1st, 2009.
Congratulations to Ollie Stegle, Ryan Adams, and Keith Vertanen on superb PhDs!
Posted by David MacKay FRS at 12:14 PM 3 comments:

Star Wars - Retold (by someone who hasn’t seen it)


Star Wars: Retold (by someone who hasn't seen it) from Joe Nicolosi on Vimeo.

Hurray for the internet - I haven't laughed that much for a while!
Posted by David MacKay FRS at 5:47 AM 1 comment:

only self-teaching has any lasting value

"only self-teaching has any lasting value" is a quote from this essay by John Gatto,
"Why Schools Don't Educate".

My own thoughts on this topic are in (1) a short essay on exams - "everyone should get an A" - which notes how exams interrupt education; and (2) a one-page suggestion on "how to teach".

Take the simplest case where the function is just a constant.

y(x) = Y for all x. (Y is Gaussian distributed and not known a priori)

Make a GP with the appropriate covariance function.

(1) think about the inference of the GP given data {x,t}. (Not very difficult is it?)

(2) see what happens when you use the standard GP matrix inversion formalism to solve the problem. What is the well-conditioned-ness of the matrix you must invert?
Posted by David MacKay FRS at 7:46 AM 2 comments:

If you feel the urge to pass the message on, pass it on.
Posted by David MacKay FRS at 2:52 PM 1 comment:

I heard this on Radio 4 - Paul Wilmott's explanation of why traders will rationally put their bank's money into suboptimal risky investments.

(Of course this isn't "the" reason why bad investments happen. Rather, this cartoon presents a simple world in which we can see why traditional incentives for employees lead to bad outcomes.)

Well, we need to specify Joe's utility function, which is dominated by his bonus. The rule at his bank is that Joe gets a huge bonus if the bank makes a big return, AND Joe's chosen investment made a big return. Otherwise, no bonus.

If Joe invests in deal A (like all the other lemmings alongside whom he works) then he has a 50% chance of getting a huge bonus.

If Joe instead invests his relatively small part of the bank's money in deal B, then he will get a bonus only if _both_ deal A and deal B come out as successes - because the bank will get a big profit only if deal A succeeds. So Joe has a 37.5% chance of getting a big bonus.

So Joe's rational decision is to invest the bank's money in deal A, the inferior investment.
Posted by David MacKay FRS at 9:46 AM 1 comment: