A long stay in hospital

After my CT scan at Addenbrookes on Friday 1st April, I was allowed home on strict instructions that if I got worse I should come back.
The theme of the next nine days (1-9 April) has been breathlessness and poor sleep. I spent a couple of days at home, taking steroids, taking anti-emetics, taking a sleeping tablet called zopiclone, which didn't seem to do any good, and trying to manage constipation with Senna and Movicol.
For the first time my phlegmy cough started to have a little pinkness or blood in it.
On the Tuesday the Marsden had asked me to come down to London for a check-up but over the weekend and Monday I was feeling gradually worse, with even just getting dressed being a tough enough piece of exertion that I was left breathless.
On Tuesday 5th April I checked into Addenbrookes and started my longest ever time in hospital. My main condition is called pneumonitis, and it has hit roughly 3% of patients who have received the wonder-drug Pembrolizumab in earlier clinical trials. Pneumonitis can work in various ways, one of which is that the body's immune system decides to have a go at the lungs, which therefore have more space occupied by T-cells and less space occupied by what lungs are meant to be full of (eg blood, air, and very thin layers of tissue).
The doctors' plan was to try to treat the pneumonitis but at the same time to explore whether anything else unusual or exotic might be going on. In particular, do I have any infections? They preemptively put my on two antibiotics in case of bacterial infections; but they wanted also to explore other types of infection, so, lucky me, I was scheduled to have a bronchoscopy to wash out fluid from my lungs and see what bugs or fungi could be fished out. All this was going on during a two-day junior doctors' strike, so progress was slow, but no-one minded - they wanted to focus on settling my lungs down, and the bronchoscopy could wait a few days.
No-one minded? Well, not quite true - I don't like being in hospital because the temperature is often uncomfortable, the bed has plastic sheets that get sweaty, the bed is harsh on the body, and one gets measured every few hours of the day and night in a perpetual world of bleeps and pings.
But there is no choice. I am desperately breathless if I move around in the slightest, so in hospital is exactly where I need to be, with an oxygen tube in my nose all the time. 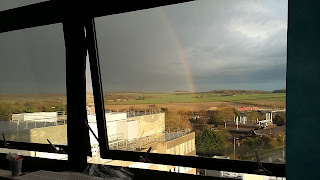 Breathlessness is not my only problem - they detected that my platelets went very low, and on 6-7 April gave me a platelet transfusion and two pints of blood too.
Once Friday 8th April arrived, it was time for both a CT scan and the bronchoscopy.
The staff at Addenbrookes are really super, but there was one painful mix-up on the Friday morning. As I was about to be wheeled through the hospital to have the CT scan, the blood technician came up and said I needed a new bigger cannula. He tried several times, it was very painful, and he made a huge blue explosion in my right arm and eventually gave up. It would be left to the CT scan people to put in the mega-colume cannula... except when I got there, they said, no you don't need any cannula at all for this CT scan! So a lot of painful stabbing was for nought.
On Friday from 11.30am until about 4.30pm I was 'nil by mouth' in preparation for the bronchoscopy, which I was dreading. I don't like having things poked down my throat. The last time I had a gastroscopy, for the benefit of the OCCAMS research study, I was quite heavily sedated and it was ok. But to my surprise the sedation for this bronchoscopy was much lighter, and I didn't enjoy it at all - but at least it was pretty brief, and they said that their washes achieved what they wanted - a bunch of salt water to send off to the labs; and as a small gift for me, I got to take away a load of salt water in my lungs, which I coughed up for the next couple of hours.
Adding the bronchoscopy to my pre-existing pneumonitis significantly increased my breathlessness, so for a good few hours I was put on a higher oxygen flow.
Every night at the hospital has been a sleepless night, driven especially by the steroids, my main treatment, which make my mind wild. And also by the sweatiness and discomfort of the bed.
Happily on the Friday night things got a sliver better: as part of my trip to bronchoscopy land, my bed had extra emergency canvases inserted between mattress and me - these significantly reduce the stickiness of the mattress. Also it was a very cool night outside and I was able to titrate the ward windows by my bed to have a comfortable air temperature. And most important of all I persuaded the doctors to change my timing of steroids so that from now on I will have them only in the morning.
I still didn't sleep at all well, but it was great to not have mental whirlwinds rolling at the same time as I struggle with pillows and posture and back pains and neck pains.
A friend very kindly brought in a tablet with lots of movies on it, and a high point of the last 24 hours has been to watch most of the first season of Breaking Bad, which is both a remarkable series, and also somewhat apposite, given its central character has cancer and is trying to juggle the balance of his remaining life. I'm relieved that I'm not having to consider the choices he has to make (e.g., which corpse to get rid of first, once his life has become embroiled in drug-manufacture and supply). It is a gripping show.
It looks like I will be in hospital for a good few days and possibly even weeks: my condition has probably stabilised, but the slightest movement (eg going to the loo) makes me completely breathless, and there are not yet any convincing signs that this is getting better.
The next step is to wait for the lab results to come back from my encounter with the lung-washing lady.
Then the doctors will have a think about whether they will try giving me any other medications in addition to steroids in order to get my lungs to settle down.
Looking at the Pembrolizumab trial results in the cases where patients developed pneumonitis, it seems there is a huge range of recovery times, ranging from days to many weeks. Hopefully I will be at the lower end of the range, but based on the last five days' progress, maybe I have to be resigned to a longer stay.
We are very grateful to lovely friends in Girton who have looked after our children every day so that Ramesh can come and visit me.
Posted by David MacKay FRS at 5:23 AM

I sent you a package, luck and love, from South Korea. I hopefully wish you getting better.

Great post. Order Zopiclone to get a relaxed sleep of 7-8 hours.